Can you imagine putting your offspring in the warmest place which just happens to be the manure pile?? I guess it makes sence in some sort of way?!?!

Latest update. We hare now in the midts of a calf explosion. You may know that with the good comes the not so good. Wouldn’t you know it when I went to take a picture of these two the calf ran to the shadow!! Well, it has a good reason. When this calf was born his mother tried to stomp him to death. Some are just not to be parents!. The cow you see in with it is a mother who delivered a still born calf. Putting them together seems like a natural way to raise the calf. It is too early yet. I am rooting for them. Oh, and by the way the red calfs birth mother was taken to the sale barn. I know that breeding is the objective and they don’t want her to deliver another calf that she tries to kill. Am I getting too attached….. 😦

Yesterday’s storm proved my Dad right. If you have pregnant ANYTHING and a storm comes up you will have babies. Yesterday saw quite a few births. And of course some of the not so great kind. I think they said 1 still born and the set of twins that they are trying to get the second one attached to something.  But they know what they are doing, for which I am greatfull. I don’t know anything about cows. Other than to stay away!!

Did you know that it is rare for a cow to have twins …more so than humans.  I know that the guys who owns the cows in front of my house doesn’t like to see twins. He just helped deliver a set and the Mom literally rejected the second twin. She wouldn’t clean it or feed it. He had to take the twin to his house for Colostrum. If you don’t know what that is, join the club. I know that it is the first milk that Mom’s  have. It gives the calf much-needed vitamins and helps the calf learn how to nurse. But this little guy will get it from a bottle and maybe it will do OK. I hope so.

I have found that the sound of cows is rather soothing. UNLESS they are getting ready to give birth. The sound makes my heart ache for them. I know that the process is not pleasant but in order for the world to keep going around (at least my world!) they have to go thru what Mother’s of all species know so well. I must admit that while I did start out with the “Natural” method. About the 3 or 4th really hard contraction I was waving my arm in the air “Epidural, table for one right here!!”  So I cheated a little.  In our maternity ward, they don’t have that option.

The barn is for the ones that need assistance. By that, I mean wrapping a chain around the calf’s feet (Hopefully the front ones) and having a hefty man pulling as the contractions and the momma cow push.

The ones waiting patiently, well maybe not so patiently. I just think about what my Mom use to say about The Virgin Mary riding that burrow while waiting for Jesus to be born.

The cows here seem to be taking it in stride – but they aren’t riding a burrow. 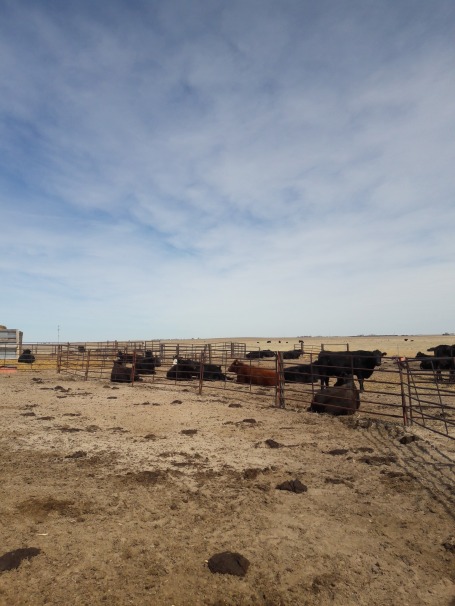 The guys that owns these cows is expecting at least 3 or 4 overnight. I wonder why they always come at night? I just hope they all have an easy time of it. Maybe I can post pictures of PAIRS tomorrow. I learned that a pair is a momma and calf. I am getting so smart! Note to self…make sure you have a really big ZOOM lens, getting between a Mom and a calf is not a good idea. So maybe I will wait until I learn a little more about this process before venturing into that territory!