I will tell you that most kids “discover” that their parents were kids just about the time they have kids of their own. Well, I know it did to me. Thinking back I should have known that something was up when I had a “Father/Daughter” ice skating party. If you have lived in the area of Englewood that use to be the Arapahoe County Fair Grounds, you know that there was also an ice rink there. Ok, that is aging me more than I wanted. Dad took me and tied my skates and helped me onto the ice. Being the klutz that I am I hugged the wall for all that I was worth. Spending time with Dad was the reason I wanted to go. Dad said he could teach me how. Even Mom was a little shocked. I guess you never really know some one, they had been married for almost 20 years at that point. He made sure I was sitting on the side and he took to the ice. He was trying to tell me how easy it was.  He made it look like second nature to him. I thought I was brave enough to try again….with Dad. Well, the confidence wasn’t quite what I needed. I needed talent!! As I sat on the ice. My Dad and an instructor got me off the ice just in time for the Zamboni to make it on the ice. I was determined that the only thing that would get me back out there was to dragged kicking and screaming!! Dad being the type of person he was decided NOT to push it. The instructor had come over to see if she could get me back out. NO SOAP SISTER!! I was already getting those devil skates off of my feet. Thinking that if I got them off he wouldn’t try to put them back on!

The instructor must have seen the pain in his eyes that was lost on a pouting ten-year-old.  The speaker announced a “Skater’s Waltz” Dad did look my way but I was busy getting my shoes back on and trying to avoid his eyes!!  She grabbed his hand and they were dancing – the only ones that were still on the ice by the end of the waltz, the rest of the people were standing and watching.  The instructor came and thanked me for letting her borrow my Dad. He was actually breathing a little heavy – but that was when everybody smoked, cigarettes. He thanked her for the dance, she asked if he had thought about teaching skating (To someone other than his uncoordinated daughter!). He laughed and said “Not lately.” She said if he wanted to she would be glad to have him. He laughed and lit a “Raleigh” cigarette. Yes, they could do that “back in the day”. When I told Mom, she looked up and said: “I didn’t know you could skate that good!?” The one trip they took to go skating was to Evergreen Lake. (another time-sensitive local!) When he learned that her skating ability wasn’t much he chose to be a gentleman (Of course) he opted to set with her in the warming hut. I did mention, they did get married right? Well, I guess we never know what our parents were up to before they became the “Wait until your Dad gets home”s person kids know them as.

OK, I know that he use to be quite the partier in his day, his brother told us. (Thanks!!Uncle Donnie!)

My Mom use to love music and she could dance the jitterbug. She tried to teach me, well remember the klutzy kid from skating, yep I didn’t out grow it. The 50’s dance at the High School was coming up. I found out that my Aunt Jo had a pair of old “saddle” shoes. Well, they ALMOST fit. I was too cool to go in my “Klutter Boots” it was the 70’s!!! So shortly after I walked into the commons the shoes were put in my purse and I was in my stocking feet, right in with the theme. As my Mom was trying to teach me, I could tell she was losing patience. So I asked if Dad could teach me – hey it worked when I learned to drive (another story!) She told me he didn’t know how to dance. Well,  he was a different kind of dancer. When he grew up in a rural area, they danced a different kind of dance. Some call it “Stomping”. I guess he tried to teach my Mom but she couldn’t seem to get the system. (Are you sensing a trend here!?!?) Mom and Dad went to the “Country Dinner Playhouse” off of Arapahoe Road for one of their New Years Eve evening. Mom by this time was past her dancing prime. When the young actors and wait staff came by to get the dancing going. Mom told him to dance if he wanted to but NOT with her. One of the girls heard it and grabbed his arm and said: “Let’s go”! He asked her if she could “Stomp”. Mom said the girl just LIT up. By the time the band stopped the floor had been cleared and everybody was standing and clapping. The girl was winded but Mom said she thought he was to have a heart attack! Again he lit up a cigarette and decided his dancing days were over.

A bit of knowledge I did come across, midway through my thirties, I know that my Dad had come to Denver,his brother Donnie, was already in Korea. When my Grandma Moe (Dad’s Mom) Called my Grandma Shurtz (Mom’s Mom!) asked if they could “look after” Dad. One of my Mom’s favorite stories is when she pulled up to the gate at Fitzsimmons, she rolled down the window and yelled: “Are you Moe?” He said yes and she yelled “Well, get in I am late for a date with my fiance” Did I mention that they were both engaged…to other people. Well, then came the shocker of my family tree. The reason my Grandma Moe called my Grandma Shurtz is that their Grandfathers were BROTHERS!!! It seems that my family tree doesn’t branch much. When Mom noticed that it seemed to bother me she said:”The Roosevelt’s, were more closely related, and he was President of the United States!” Well, I don’t know if she thought it would make me feel better…It didn’t!!

These are stories that I was told by Mom, Dad, and various family members. I guess the sad part is that when I had the opportunity to learn them first hand, I was too busy. Things I learn about both of my parents are gone. I guess the part I miss is now that my son is grown up I wonder what part of my life he will remember, and what part will he wish he knew? 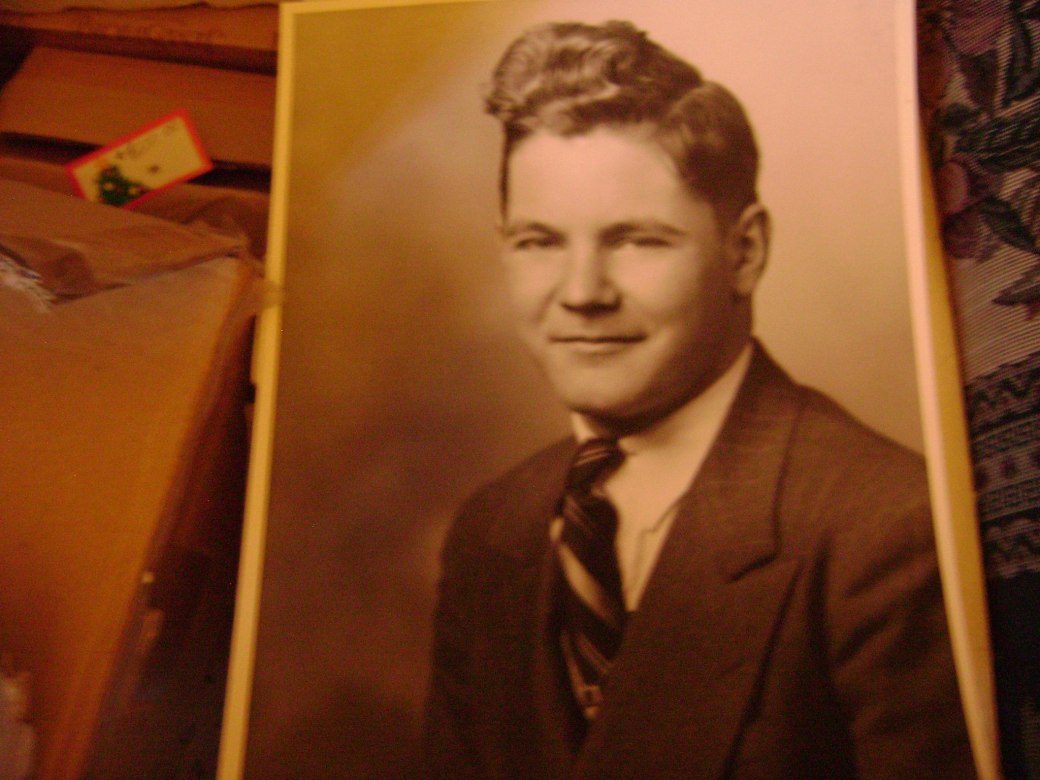 This is one of my favorite pictures of my Dad. He looks like he still has a secret or two that we will never know. This side of heaven anyway. It is true we never miss them until we loose them.