A young woman found out that her husband had been unfaithful. They had been married for 5 years and she thought they were very happy. They had fights – but what married couple don’t? She suspected him when he wouldn’t let her see his texts or phone calls on his “business” phone.

She didn’t know what to do. So she followed him. She saw him drive from their house where they had just made beautiful love in the home they shared. He stopped but not at his office.  He pulled into a rather tacky hotel. He got out and was met at the door to a room by a lady in a very skimpy negligee.

She rushed to the door and knocked even with the “Do Not Disturb” sign on the knob. She called out “Room Service” trying to disguise her voice. She heard a muffled “NO” from the inside. She yelled even louder “Room Service”. This time the man in a state of almost undress answered, he flung the door open and when he saw who was actually there he started with the “This isn’t what it looks like!” “I can explain!” “She means nothing to me!”

On that one she turned and with anger flashing in her eyes “Then I must mean even less than nothing to you! That you could do this!” Using every ounce of her will power she turned and walked away. Not knowing where to go she found her self at her parents house. She didn’t knock but rushed right in to see her parents at the kitchen table. They were drinking coffee and reading the paper. When she burst in they both ran to her side.

“He is cheating on me! In a motel!!” Now her Dad knew that this called for some serious girl conversation. He walked into the garage. Her Mother was trying to find out what had happened. She went to the stove and took three pans out and filled them with water. She gave her daughter another box of Kleenex, and waited to hear the story. It came in pieces. Between sobs and hiccups. When the water was boiling her Mom got up and put potatoes in one pan. Eggs in another and the last one she put coffee into. 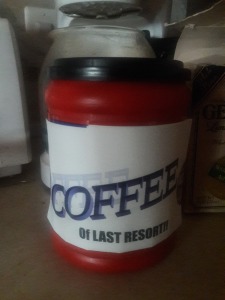 The daughter had seen this as a meme on Facebook. The potato became soft, the egg became hard and the coffee changed this environment. She couldn’t believe her Mom was going to use this to explain what she should do next. When Mom came back to the table she sat down again without saying a word. The daughter on the other hand screamed at her Mom “Really! Really! I come to you for comfort and guidance and what you are giving me is a damn internet recipe??”

Mom looked rather taken aback. “No, we are having potato salad with lunch and the coffee pot broke down this morning. I thought you could use a strong cup of coffee.” Knowing that her daughter was in no fit state she just let it slide.

Walking to the garage door she picked up an item that had been placed there. When she could finally be heard over the sobs. She smiled a rather wicked smile. “Now wash your face and pick up the baseball bat, I have the shovel and your Dad has gotten the car ready!” almost as an after thought “Oh, bring your purse you are going to need ID to clear out your joint accounts!” The smile came back with the next question. “What motel was it again?”

NOW THAT IS FAMILY!!