I have a daily prompt that I check out when I seem to run dry of stories. It prompts me to think about my next wonderful writing inspiration. This one doesn’t actually make me think of a new story but I do have one that I will republish. Just in case someone hasn’t read it before. So with the cat on my shoulder giving a very good impression of a fur collar, warm coffee in hand, looking out side. And celebrating a new year I give you a blast from the past…. one of my very first blogs! I have to say that it looks nice and sunny out but the temp is only about 15 – New Year old WEATHER and of course an OLD blog.

Where is the strangest place you have ever had a conversation? Behind the bleachers in school? ” OMG, he likes you! he like likes you!”? Next to the produce aisle “does this look fresh to you?” or maybe under the restrooms stall “Hey, sorry to bother you but I seem to be out of toilet paper over here, could you maybe give me some?” I admit that was the strangest place I have had a conversation!

Until now. I am currently residing on a farm/ranch. Which leads to a whole new class of odd. “Hey, got some udder butter?” “When you milk make sure you dip each teat in the iodine.” followed closely by “I TOLD YOU TO CLOSE THE GATE!” “Did you make sure to wipe the nipple?” and of course my favorite “Where in the hell did you put the bucket!?” a whole new group of questions has opened up but I have to say the strangest place I have ever had a conversation? As you might have guess from the trend of these questions, UNDER A COW! Up to three years ago I would have told anyone that they were crazy, if they had said I would be talking to anybody under a cow. 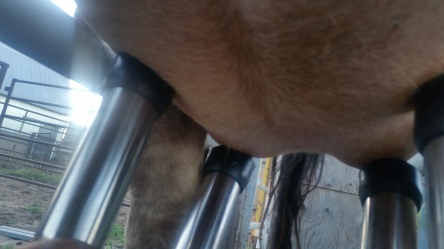 She is a nice mellow cow, if you make sure she has her grain while she does her best to tolerate the conversations, swearing and plain awkwardness of my brother Harvey and I trying to get the automatic milker going to relieve her udder of the white milk that she hoards there. I can tell you that we have had some real problems just trying to get the stupid thing to work properly. When we do we are both under the cow trying to make sure that she doesn’t break the suction by hitting the “claw” with her hoof. Which would mean that we would have to restart the entire process. Due to the fact that the stall she is milked, is well, it is farm equipment. ‘nuff said? Good. While we may be learning the ropes the only one who really knows what they are doing is the cow, and she ain’t sharing! We keep her grain bucket full and her teats clean, and hope for the best. 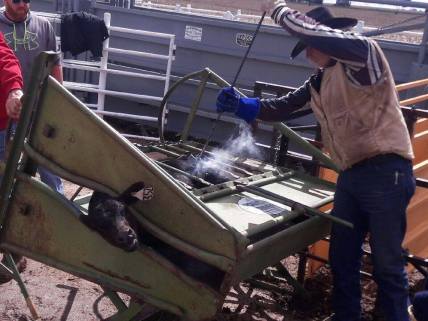 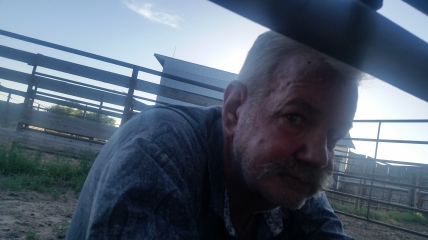 My partner in crime is my brother Harvey. Yep that is him under the cow with me. Doesn’t he looked so PLEASED?!? The last picture was taken yesterday. Cold out?!? He looks like Nanook of the North!

Just an update on the cows. Bessie is pregnant and so we decided with it being dead winter and she is trying to keep herself warm and growing a calf. We wouldn’t stress her out by milking her. She needs those calories to fuel her new calf. So in the next couple of days we will be headed to a cattle auction in Bush. Will we find a new cow? Will she be pregnant? HOW in the world are we going to get two cows in the squeeze shoot? Answer to these interesting questions to be posted here in the future.