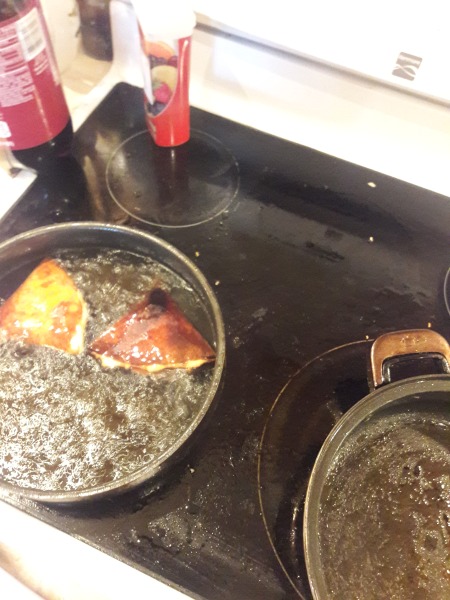 I saw this question posted on Facebook. Yep, I have a story about it!!

My class only had about a half dozen stoves in the Home Ec room. So we were set up to be the second group to actually cook. We turned in our grocery list. We had settled on apple fritters.

The first group in the class had been flawless in their production of tasty foods. The teacher said that was a sign that the whole class would do well. OK, YES she said that but really?!? Is there any greater jinx to a class? When my cooking partner and I had peeled and chopped the apple it was a little late in the class so next we had to dump the ingredients in and mix quickly. I know you all know what happened next but PLEASE let me catch up. The pan was on the stove and the thermometer wasn’t rising very fast. Remember the apple peeling? It took A LOT longer than the teacher allowed. So in an effort to speed it up I turned the burner up and up, did I mention? UP the teacher came by several time and tutted when she got to our “kitchen”. About the third or fourth time around the oil was actually ready. I don’t think the teacher had taken more than a step or two down the line when we had put our “dough” into the hot grease. Anybody know what happens when you put cold dough into HOT grease? Let me fill in your education on that point. It splatters and spits grease all over the place. On the burner that had been turned up past the point of safety. We had a small fire going. Small hardly worth mentioning… at least that is what we told the principal.

Thank goodness the teacher wasn’t that far away. She dumped some flour on the burner and we were sent to the principal. I tried to explain the fact that we were so far behind that we needed to catch up. Poor guy tried to keep a straight face. Our punishment? We had to clean the flour and ALL of the kitchens. He said he would let our next class know we would be late. Well, MY next class was LUNCH!!! I really liked lunch!! If you know me you know I STILL like lunch and dinner and FOOD!!! Well, we cleaned all of the kitchens and left ours to last. The flour had put out the fire but it burned into an almost cement like mess. We scrubbed and scrubbed finally the flour was cleaned up. We hadn’t done the best job of cleaning up our kitchen but the teacher said we could go. Just as we got to the door the bell rang. We had spent MY entire lunch period cleaning. I could have screamed!!

So no lunch for me. I still hate cleaning… AND no I never learned how to cook!!