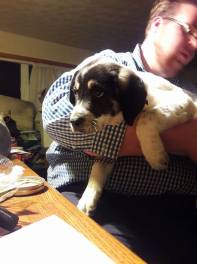 …that is what little boys are made of. My Son Peter is very much a man now but growing up he had a habit of “Crying Wolf” just to see if anybody would respond. Most of the time I could tell that he was not really hurt or was just being funny. HOWEVER with the screams of playfulness there came the really serious screams, the ones that every mother recognizes as needing IMMEDIATE attention.

I just finished an update on a story about Peter getting his Cub Scout badge for his pocket knife. One night after his bath and nightly rituals, he had gone to his bedroom. He seemed very quite, which every mother knows spells disaster.

He decided that he wanted to punch a hole with his pocket knife in the cap of his water bottle. Yep, the knife slipped (Isn’t there something about always having the blade pointed AWAY from you in the badge requirements?). The scream that I heard was that of a terrified kid in pain. He asked me later how I knew he was really hurt, I guess Mom’s just know. When I saw the blood, we went to the bathroom to see if we could rinse off enough to see what actually happened.

Between the screaming kid, my Dad trying to “help” and Mom in the livingroom yelling “What happened?” I made the executive decision that the ER was on the nights agenda. Dad came with us and held the wash cloth on Peter’s hand despite the yelling about how much it hurt. We entered the ER dripping blood, I thought my Dad was going to have a heart attack and with me trying to find the right insurance cards. Rather than have us wait in the waiting room, which would be much like letting a three-ring circus into the Vatican, they showed us into a room right away. Peter was trying to calm down and Dad decided that he would take the bloody rag out to the car and then wait in the waiting room.

That left Peter, me and a nurse who was trying to ask questions like “Do you feel safe at home?” Of course he didn’t feel safe at home…he just stuck a knife into his thumb, I KNOW I DIDN’T feel safe! The nurse asked me to leave while they interviewed Peter, what do they think happened? I tried to slice off his thumb or something? Anyway they must have gotten the right answers because I was ushered back into the room to sign the consent forms. The Doctor came in with a nurse trailing with the surgical tray.

I guess growing up with a Mother who is a nurse and having various issues myself, it didn’t dawn on me to be anywhere else but with Peter in the room. He held my hand in his GOOD hand and squeezed it really hard when they gave him the numbing shot. Soon the stitches were done (7 I think), his hand was bandaged, we collected Dad from the waiting room and made it back all in the space of about 6 hours!

Of course the next day at school he was explaining how brave he was and it was just a pure accident that he cut himself.  The Cub Scouts never did ask for the pocket knife badge back, but the pocket knife itself found a new home with my brother Harvey!

Peter went through a stage of trying to scare everybody. Well, I guess we all go through that. Some of don’t out grow it, OK, I didn’t out grow it.  One night I saw Peter trying to sneak up on me. We had a picture hanging on the wall directly across from the hall way. I could see Peter trying to sneak up on me and scare me. I let him get really close and before he could jump at me I jumped at him…. all meant to be very funny, right? It’s all fun and games until someone lands in the ER AGAIN!!! When I jumped and said “BOO” he fell back over a quilt stand and I hear a “POP” not a good sign, I could tell the quilt stand was still in one piece so that left Peter. He was holding his shoulder and screaming. I assumed (I know NEVER assume where kids are concerned!) that he had dislocated his shoulder. Mom was telling me to gently extend the arm and see if it would pop back into place. So GENTLY I extended his arm trying to use extension a sublimation (sp?) to see if it would move back into place.

By this time Peter has had enough and starts yelling, “Not my shoulder my arm!” Yep, the arm I was holding and trying to move was the arm he broke. Yet another trip to the local ER was in order. We had a bag of peas or corn on his arm and this time we had to wait, I guess blood means no waiting, excruciating pain – not so much of a hurry.

The Doctor came in and once again I was sent to the hall way while they asked the questions of how it had happened. Really? They must have had his records on speed dial by this point! I would think that they would know by now, but what ever. We went to X-ray – Yep broken arm. Cast? NO, now they just put a splint on it and you have to take the kid to another doctor. Remember the days when the doctor’s office was not only the doctor but the lab (blood draws) x-rays and most of the time pharmacy all together. OK, I know I am old but they even made the occasional house call. Now we have to have the initial x-ray, splint and instructions then we have to go to another Doctor have another set of x-rays and schedule surgery because the bone had slipped. (couldn’t have been from me pulling on it? Naw.)

After the 30 second surgery – litterly I didn’t even have time to pour Dad (Yep, moral support AGAIN!) a cup of coffee before the surgeon came out and said it was all done and the cast was being applied before Peter woke up.

Being a Mother is the best thing in the world, having my parents around to help didn’t hurt either. I just hope when Peter has kids of his own he remembers the reason for all of my gray hair!!