Where is the strangest place you have ever had a conversation? Behind the bleachers in school? ” OMG, he likes you! he like likes you!”? Next to the produce isle “does this look fresh to you?” or maybe under the restrooms stall “Hey, sorry to bother you but I seem to be out of toilet paper over here, could you maybe give me some?” I admit that was the strangest place I have had a conversation!

Until now. As you may know I am currently residing on a farm/ranch. Which leads to a whole new class of odd. “Hey, got some udder butter?” “When you milk make sure you dip each teat in the iodine.” followed closely by “I TOLD YOU TO CLOSE THE GATE!” “Did you make sure to wipe the nipple?” and of course my favorite “Where in the hell did you put the bucket!?” a whole new group of questions has opened up but I have to say the strangest place I have ever had a conversation? As you might have guess from the trend of these questions, UNDER A COW! Up to three years ago I would have told anyone that they were crazy, if they had said I would be talking to anybody under a cow.

She is a nice mellow cow, if you make sure she has her grain while she does her best to tolerate the conversations, swearing and plain awkwardness of my brother Harvey and I trying to get the automatic milker going to relieve her udder of the white milk that she hoards there. I can tell you that we have had some real problems just trying to get the stupid thing to work properly. When we do we are both under the cow trying to make sure that she doesn’t break the suction by hitting the “claw” with her hoof. Which would mean that we would have to restart the entire process. Due to the fact that the stall that she is milked in is well, it is farm equipment. ‘nuff said? Good. While we may be learning the ropes the only one who really knows what they are doing is the cow, and she ain’t sharing! We keep her grain bucket full and her teats clean, and hope for the best. 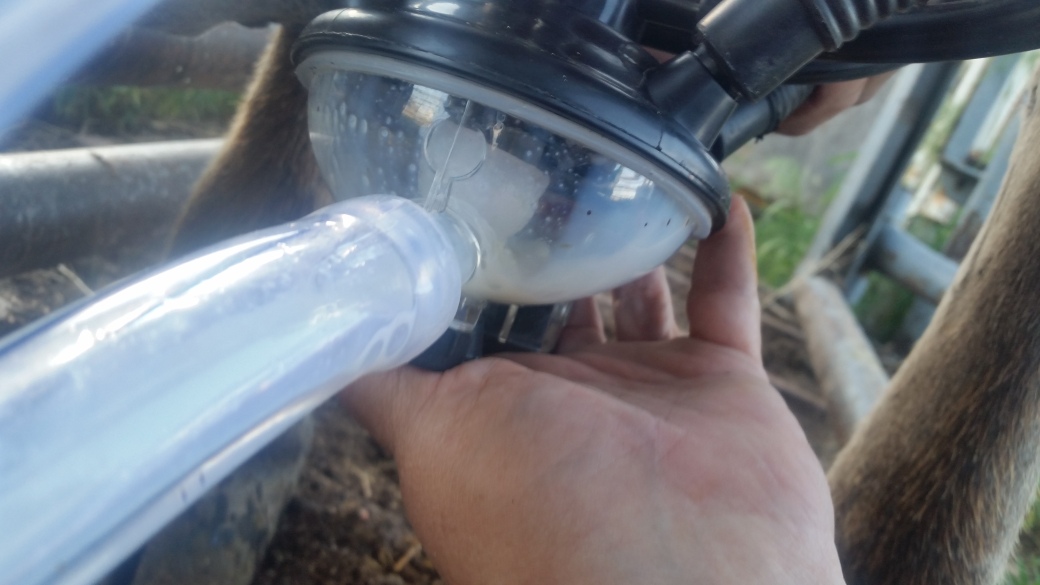 We now have a freezer full of raw milk. John – Peter’s Dad made some ice cream, wonderful stuff, and some whipped cream, strawberries and short bread, really good stuff. But it seems to be piling up quicker and quicker. Bessie gives about four gallons a day. We have a separator, from somewhere that they don’t speak English. While trying to manage to put it together correctly we managed to spill about two of her precious gallons all over the floor! The dog loved it, the cat deemed it unsuitable for her consumption after the dog started licking it up.

We have butter blocks, cheese press (?), but yes again not sure how any of it works. You Tube seems to be our best friend at the moment. We have found several sites of people with the same milker and separators. They show us how to do it. Hoping that they know what they are doing – at least they didn’t have milk pouring out of the overflow and all over the floor!